We exceeded the planned KPI for target audience coverage by 27% due to targeted audience development and even generated twice as much traffic for further transactional campaigns. The case of Luxoptica and Alcon

The agency of personalized marketing iplace shares the case of promotion of a new product from Luxoptica's partner Alcon, daily contact lenses PRECISION 1™.

- Customer. Luxoptica, the largest chain of optics in Ukraine with 208 stores across the country.

- Service. Promotion of a new product - daily contact lenses PRECISION 1™ from Luxoptica's partner, the Alcon company, with the help of context and media advertising.

- Purpose. To tell the potential brand audience about the launch of the new product and that it can be bought in the network of Luxoptica optics.

- Objective. To reach 2.8 mln people in Ukraine on a high frequency of impressions. To form their knowledge about the fact that daily contact lenses PRECISION 1™ by Alcon brand are sold in the network of Luxoptica optics.

- Result. We reached 27% more ↑ users than we planned, we got 2 times more clicks on our ads ↑, and we exceeded all our planned KPIs.

- How we did it. In order to cover the most interested in the new product audience we chose more than 30 relevant targeting types for five advertising tools. And we also used a warm base of contacts: those people who had bought lenses, glasses and medications at Luxoptica before, as well as those who had had their eyes checked here at least once or had recently signed up for a checkup.

Then we set up look-alike targeting on the existing bases: it was important to attract to the new product the attention of an audience similar in behavior and  other characteristics to the current clients.

Read more about what these interests were and how the targeting worked in the text of the case study.

Luxoptica' partner, Alcon, launched a new product in the spring of 2021: PRECISION 1™ daily contact lenses. According to the manufacturer, PRECISION 1™ were created primarily for beginners, those who want to try wearing lenses instead of glasses for the first time. But experienced wearers who have been wearing lenses for a long time should also like the novelty, because PRECISION 1™ are made of elastic and durable material, protect the eyes from UV rays and their surface is covered by a soft "breathing" gel.

To make the novelty known to as many Ukrainians as possible, Luxoptica company planned a big advertising campaign and applied for help to iplace.

To tell about PRECISION 1™ contact lenses, to build awareness about the product and create demand for it in all cities of Ukraine, where there are Luxoptica stores.

In the beginning, the iplace team developed a strategy to promote the new product, defined the target audience and advertising formats:

- KPI's: reach. In 1.5 months of advertising campaign we planned to reach more than 30% of the audience of the total TA within the limited budget at a high frequency of impressions.

We identified tools that could be used to attract the attention of a potential audience:

- as well as Programmatic and Admixer.

Google Display Network. In the Google contextual media network we used targeting by the following interests: 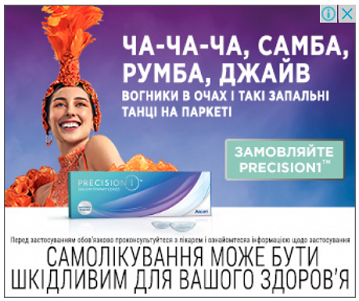 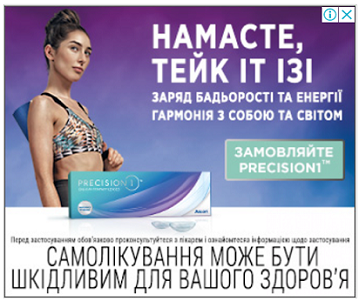 Examples of advertising banners in GDN

Google Discovery. We targeted users based on the interests we picked up for the Google Display Network, and also used a database of people who had already bought contact lenses or glasses at Luxoptica and had had their eyes checked here at least once.

For this tool we also gathered audiences by: 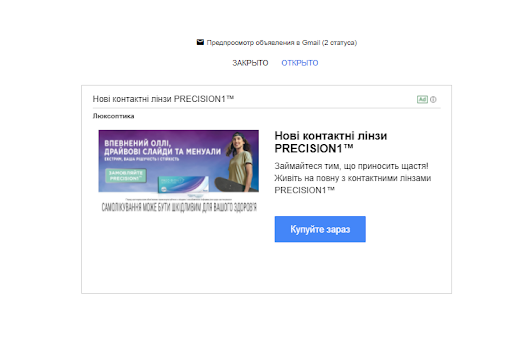 - base of users who used to buy moisturizing drops, eyeglasses, computer glasses, contact lenses and others at Luxoptica,

- look-alike to user bases. Such targeting works so that the system, based on a list of existing customers, is looking for people as similar to them as possible. 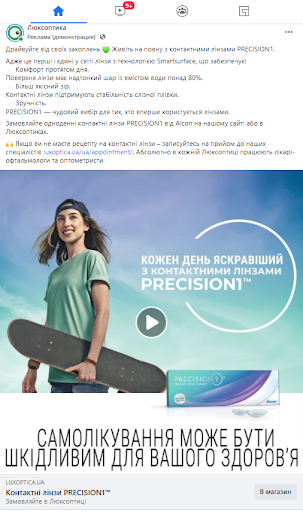 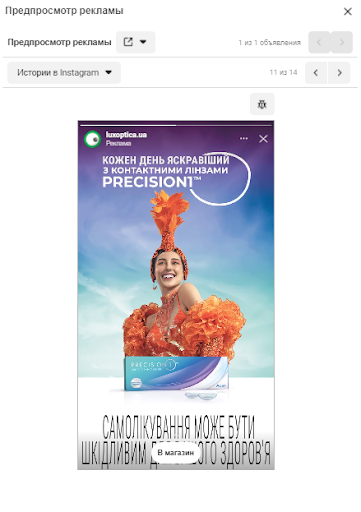 The planned KPIs were as follows:

As a result of the pinpoint targeting and relevant targeting, all planned KPIs for the promotion of the new product, PRECISION 1™ daily contact lenses, were exceeded:

- Impressions. Within the whole period of the advertising campaign we managed to get 11,027,048 impressions, which is 20% higher than the planned figures. Facebook and Instagram had the most impressions, while GDN had the lowest CPM (Cost Per Millenium, the price per thousand banner impressions), 7% below plan.

- Clicks. We got 43,392 clicks in our ads, which is 2 times higher than our plan. Most of the traffic was brought by Admixer (Mobile Ron), which also had the highest CTR (Click-Through Rate, ratio of the number of clicks to the number of impressions) - 3.34%.

- Coverage. We covered 3,601,919 users (38% of the audience) which is 27% higher than the plan. The main channels that worked best were Facebook and Instagram.

Such high results were achieved due to the fact that we hit, as precisely as possible, the audience, which was of interest to us in terms of attracting attention to the new product from Alcon and Luxoptica.

- over 30 types of targeting based on the client's TA portrait,

- the use of look-alike targeting based on existing customer bases, which expanded our potential audience,